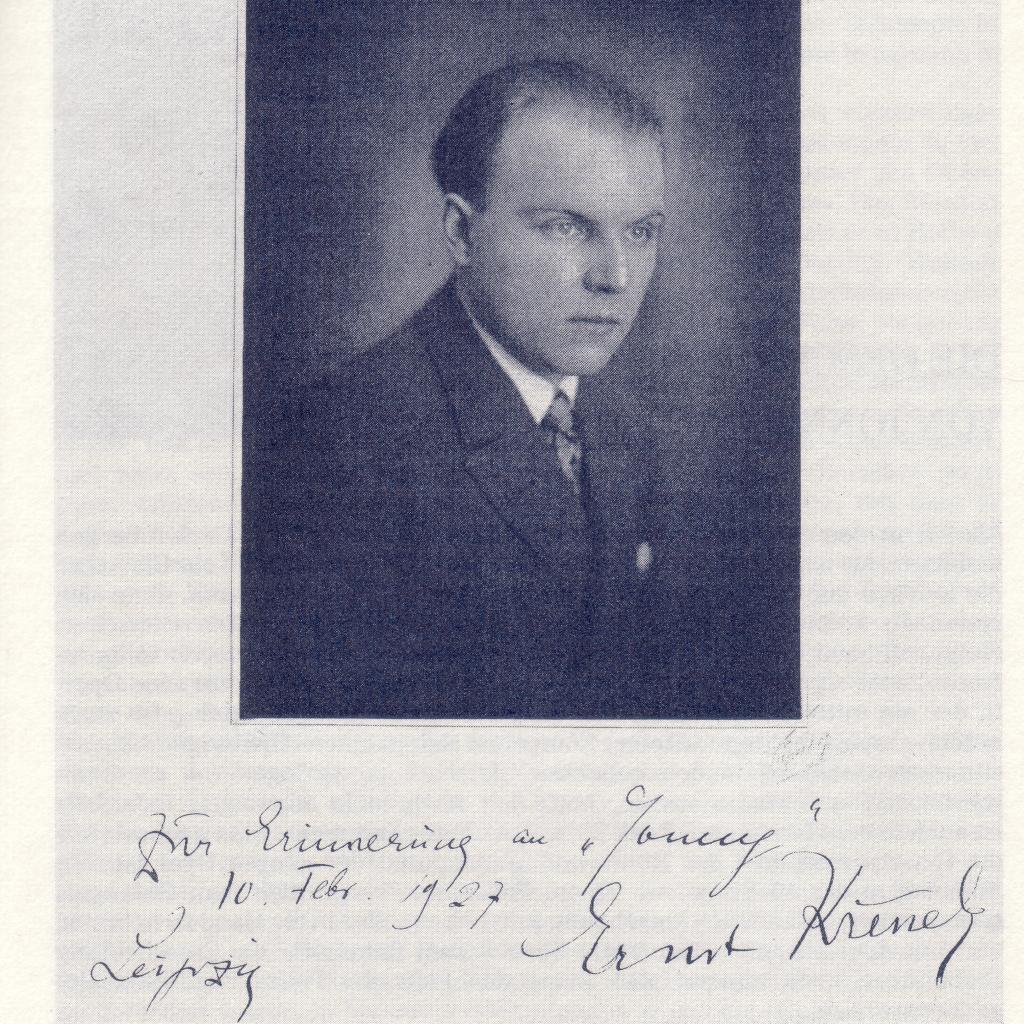 Symposium “The Gewandhaus Tickets have been Ordered” – Ernst Krenek in Leipzig

One can almost call Leipzig one of Krenek’s main cities. Not only were two of his most successful works, Jonny plays on (1927) and Travel Book from the Austrian Alps (1930), premiered there, but also his opera The Life of Orestes (1930, which has not been in the repertoire for a long time. Indeed, in early 1930, the still young composer was honored in Leipzig with his own festival week.

This led to artistic as well as personal connections being established, for example, with the director Walther Brügmann or the conductor Gustav Brecher, who were both active at the Neues Theater. But Krenek had a particular affection for Leipzig above all because Emmy Rubensohn hailed from the city of Bach. Emmy Rubensohn was the patroness of music in whose villa in Kassel Krenek lived during the mid-1920s and where he created Jonny. Throughout her life, she promoted her protégé, in that, for example, she helped get Orestes staged in Berlin’s Kroll Opera; or later, in that she, in conjunction with Alma Mahler, (unsuccessfully) attempted, pulling strings from New York, to have Krenek named Schoenberg’s successor at the University of California.

The symposium is incorporated in the exhibition “Curtain up for Emmy Rubensohn! Patroness of Music from Leipzig,” which opens on 10 November in the Mendelssohn Foyer of the Gewandhaus and closes with the “Large Concert” on 16 and 17 December.

Musical interlude at 1.00 p.m. – Students of the College of Music and Theater “Felix Mendelssohn Bartholdy” Leipzig (class of Prof. Kusnezow) play a selection from Ernst Krenek’s Goering Songs for voice and piano

4.30 p.m. - Nils Grosch (Salzburg University):
In Leipzig and Berlin: The Life of Orestes

The exhibition and the symposium are part of the festival year “1700 Years of Jewish Life in Germany” and is supported by #2021JLID – Jüdisches Leben in Deutschland e.V. with funds provided by the Federal Ministry of the Interior (BMI), by Siegen University, the Ernst Krenek Institute Krems, and the Reinwald GmbH Leipzig.

Exhibition
CURTAIN UP FOR EMMY RUBENSOHN! Patroness of Music from Leipzig (1884–1961)
from 10 Nov – 19 Dec 2021 in the Mendelssohn Foyer of the Gewandhaus Leipzig.

Flyer about the exhibition and accompanying program