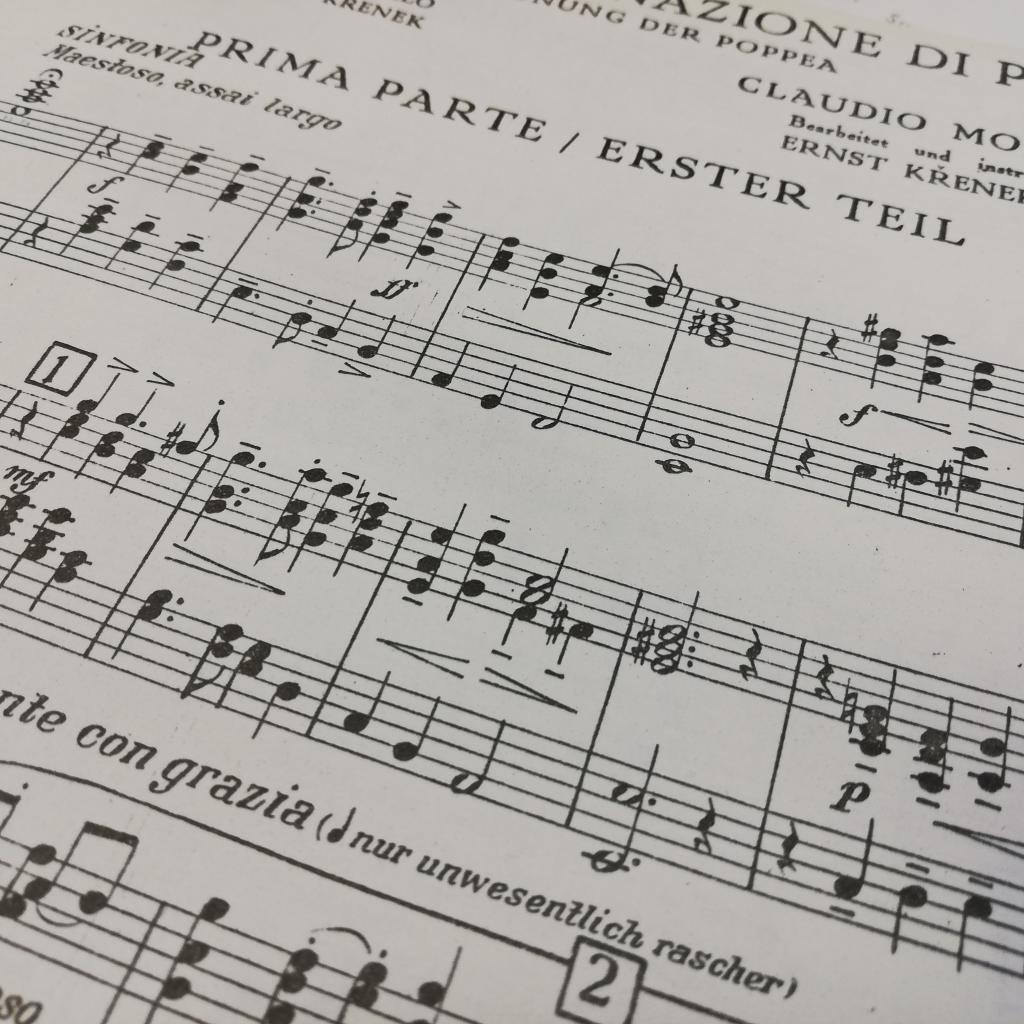 On 28 April 2019, the production of Claudio Monteverdi’s late opera L’incoronazione di Poppea, arranged and orchestrated by Ernst Krenek, celebrated its Swiss premiere at the Theater St. Gallen. Monteverdi’s stage work takes up the historical story of Emperor Nero’s marriage to Poppea: a web of love, intrigues, might, and abuse of power.

The music of Poppea was discovered at the end of the nineteenth century in a Venetian manuscript. In accordance with the practice of the seventeenth century, the notation was however sparse. Economically figured basses, condensed depiction of the middle voices, and no instrumentation indications. Thus, for several composers it was very enticing to lead Monteverdi’s work into the sonic world of the modern opera. In the musical world, one in any case believed in Poppea’s long-lasting success.

Krenek’s arrangement dates from 1935/36, and thus from the early stage of the great Poppea rediscovery. He admired the music of Monteverdi, and particularly Poppea. Entirely in the tradition of Mozart and Mendelssohn, who also arranged older works for contemporary audiences, Krenek dramaturgically and musically modified the original. He did not strive for a historically accurate reconstruction, but rather wanted to make the then little-known work accessible and attractive. This practice was – in spite of all critical voices from the ranks of the musicologists – not unusual at that time.

I always had great admiration for the Incoronazione, as I did for all of Monteverdi’s works ... the Poppea libretto, which seemed to me to be the work of an outstanding dramatist, I admired no less.

In search of performance possibilities, and in view of the fact that, with the assumption of power by the National Socialists, performances of Krenek’s works were forbidden in Germany, the possibility to present the work on a tour of the USA by conductor and composer Paul Csonka’s Salzburg Opera Guild was very opportune. The premiere took place on 25 September 1937 in Vienna. The tour through America followed shortly thereafter. The response of the media was great and positive throughout.

After the tour, there were apparently only a very few performances of Krenek’s Poppea arrangement. All the more gratifying is the revival at Theater St. Gallen!