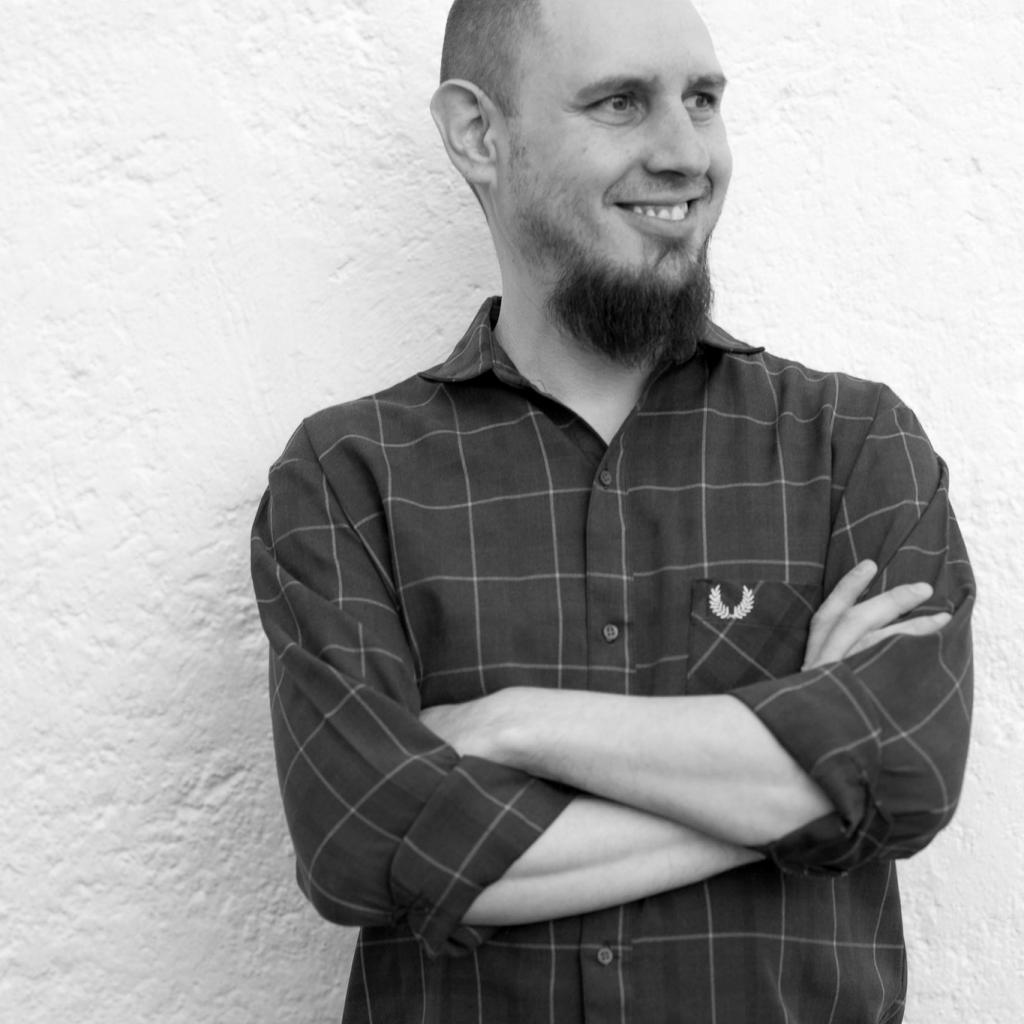 “… it is like a journey. The next day, it becomes a completely new adventure”

In January 2019, Mexican composer Enrique Mendoza Mejía was a guest in Krems under the auspices of AIR-Artist in Residence Lower Austria. The focus of his visit was work on the Buchla Modular Synthesizer from Ernst Krenek’s estate.

Alethea Neubauer spoke with him about his fascination for analog sound synthesis, his career, and his latest project.

What led you to compose? Tell us about your musical career.

I found my way to music rather late. At the age of fifteen I started to play electric guitar. I was especially enthusiastic about rock music and its energy. My parents were not musicians, but listened to a lot of pop music from Mexico and England. My father was a great Beatles fan. At that time, I also had a metal band. My guitar teacher then began to study composition. He was a role model for me, and I wanted to follow in his footsteps. Before that, I had little contact with classical or modern music. Discovering this music enriched my life greatly, and at the age of eighteen I decided to enroll in a bachelor’s program for composition. I then made many transcriptions for composers in Mexico, entering scores and parts into a notation program. The older generation of composers still wrote everything out by hand. But then they learned to work with the software themselves, and I had to look for a new job. That’s when I decided to earn a master’s degree in Holland.

When did you write your first work?

I composed my first work toward the end of my bachelor studies. Before that I had already written songs with a friend for the metal band, but I don’t count these among my first compositions. In 2001/2002 I composed a Trio for piano, violoncello, and clarinet. The next piece was a woodwind quintet. I was very fortunate to have my pieces performed in Mexico since there are very few performance possibilities.

When and how did you encounter electronic music?

This was the second moment in my life in which a door was opened for me, so to speak – this happened in Holland. I have always had a fascination for electronics, but I did not yet know contemporary electronic music. I had indeed heard popular electronic music like The Prodigy or Chemical Brothers, which I still like, but then I met one of the most important persons in my life at the Conservatory, namely Professor Jos Zwaanenburg, who is an eminent authority above all in the area of live electronics. He brought me to STEIM, the Studio for Electro-Instrumental Music in Amsterdam. I took many courses with him in sampling and other techniques of musical construction. This was an absolute door opener for me, since I had been very much captive in the notation and in harmonic thinking. I lacked the classical training as a child. Electronic music opened up for me an entirely new dimension in the handling of sound. Then I simply could not stop any more. That must have been around 2008.

Do you think that the access in electronic music is generally more open than in classical music?

Yes, in many respects. Nevertheless, I try to limit myself in terms of form and structure. Above all in Holland, I noticed that electronic music indeed employed marvelous sounds, but that it is not always presented in the best way. It is often merely long, without points of reference, which in my opinion can quite simply be boring. I have reflected a great deal upon my works, and no matter what fantastic pictures one creates, and how crazy the sound might be, form is very important for me. I like to compare it to cooking. One has the best ingredients for a hamburger, but if the meat and the mustard are outside the hamburger bun, it will not be a great pleasure to eat. So no matter how unusual or even traditional the music is, one should not forget the presentation and the audience. This is something that I think about a lot. I earned my master’s degree in composition for film, and I have long been interested in narrative processes: every piece should take the listener along on a journey. It needs a beginning and a development. Repetition, too, is an important element for me. In electronic music, I also sometimes employ classical forms, although one possibly does not even hear it. For me, it is a way to arrange the unusual material. Otherwise, I am very free, but I need a real structure so that it is also interesting for the audience, and naturally also for me. I like to listen to my own music. It should therefore always be a journey.

What fascinates you about working with synthesizer?

I like to experiment with extremes: to go from one extreme to the other, but also to find a balance. Many artists limit themselves to the decision of working completely digital, others only analog. For several years, I have attempted to find a middle course. The work with the synthesizer fascinates me because it requires human interaction: to connect cables, to press buttons, to adjust control dials and faders. One can simultaneously control different parameters, and I like this direct contact. In digital sound production, one has only the use of the mouse, which additionally has the constraint that one can only do one thing at a time. I find that very limiting. Therefore, I have started to build small modular mini-synthesizers in order to generate sounds that I then process digitally. This has proven to be a good combination for me.

The wonderful thing about analog synthesizers is also the imperfection. Much is not quite exact. On the Buchla, a tone does not remain entirely stable. For me, it has something a little bit dirty about it. Often, when I compose, I take analog parts and then process them digitally. Thus, when composing a work for an instrument and recorded tape, I mostly begin analog. Many of my pieces have also been created by sampling various sources. I am increasingly trying to work with analog synthesizers, even in live performances; I then process the sounds digitally. In this way, I combine the two worlds. The digital world is naturally fascinating, because it can make so many different things.

What is special about the work with the Buchla synthesizer?

It is a historical instrument and part of the history of electronic music. Today, they are not easy to find, especially the series 100. They are expensive and rare. There is also something very exceptional about having the possibility to work on this synthesizer. It is very clear how one connects the cables and ports with one another. Don Buchla also did not make a keyboard; the touch pads are not like keyboards. Thus, the idea of creating a melody vanishes. Most synthesizers are produced in combination with a keyboard; so one can make the craziest sounds and then go back to playing melodies. This is not the idea of the module on this synthesizer, and I like that.

I have heard that it is very difficult to reproduce a sound exactly on the Buchla. How do you deal with that?

Well, I record all of my improvisations. But each of these improvisations is unique. Earlier, one attempted to take photos or make sketches of the exact settings in order to depict the exact position of a dial. But it is still difficult, and one could become frustrated because one cannot get exactly the same thing twice. For me, it is an advantage that I record everything and then process it digitally. I see this as a part of the adventure. The fascinating thing is that one also learns to let go: do it once, improvise, get the best sounds, and sometimes I later cannot even remember anymore how I began the session. But for me, this is a journey that I treasure. The next day, it becomes a completely new adventure. In contrast to this, in the digital world it is always about being as exact as possible, to save everything, and the next time everything is exactly as one left it. This is super, but nevertheless it is much more adventurous to work with this analog synthesizer.

How would you characterize your compositional style in three words?

What are you working on during your stay in Krems?

My plans have changed a bit due to the possibility of working with the Buchla. Originally I wanted to build additional small synthesizers and make 45 minutes of music, with the title “Man against Creation,” with my own analog synthesizers. I would like to then publish the album online. I improvise with different sounds and now I have the possibility to integrate the Buchla. I already have many sounds that I will now process digitally.

Tell us more about the project.

The concept “man against creation” takes up extra-musical themes. It makes me very sad when I experience the mistreatment of nature, animals, and other human beings. I got the idea from a movie by Darren Aronfsky. It amazes me how we can summon up so much power and energy in order to destroy. The album will deal with this theme in several parts. I have read numerous scientific articles about the sixth mass extinction in the earth’s history. Many vertebrates have died out during the past thirty years; many species are gone, like a small snake or the white rhinoceros. In Mexico, one attempts unceasing to save the common porpoise for extinction; I read that in the coastal areas of Indonesia 10,000 sharks are killed every day in the most ignoble manner for a certain soup. The main theme of the album is thus the ruthlessness of this killing.

The sound is thus rather dark?

Yes, of course, dark, loud, and groovy. I attempt to respect nature and the environment. I have reduced my consumption of meat, do not drink milk, and would like to practice the appreciation of nature in my daily life. And I would like to call everybody’s attention to it. Of course, I do not have the influence of the world-famous mega artists who can reach millions of people at once.

Do you believe that it is the duty of art to call attention to such subjects?

Yes, I do think so. Especially the international stars with so many fans. One sometimes hears about actors who campaign for the UNESCO. But musicians, too, have a platform with their audiences. Of course, they can do what they want. We have countless love songs; another one can be nice, but I think that we actually already have a kind of emergency situation. We don’t need another dance song that tells you how to put your the hands up and down. Thus I really think that it is a responsibility for great artists. Modern music naturally does not reach so many people, but a small grain of sand is part of the desert.

It’s super. I like Austria very much. And every time I am here, the people welcome me with open arms. I feel very good here. The residency is terrific. I have a great workplace, and the equipment is super. It is wonderful working in Krems and in the Ernst Krenek Forum. Krems is a small town. Everything is within walking distance. For me, it is a beautiful, very productive, and inspirational time. I would definitely like to come back again!

Many thanks for this interview!