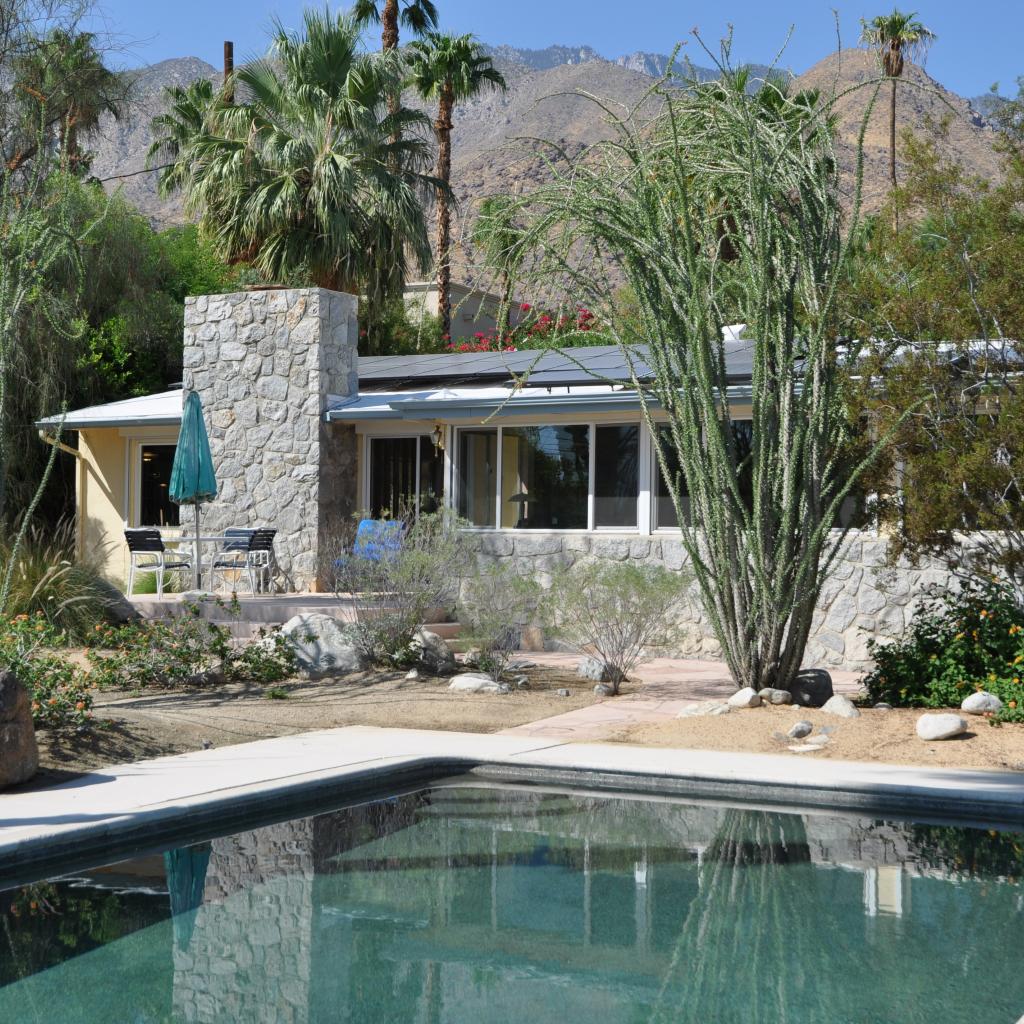 News from the Institute

Since the 1930s, the tranquil desert town of Palm Springs in southern California has attracted countless actors, artists, architects, designers, and musicians. Only some two hours by car from Los Angeles, it became a popular retreat and vacation spot for the high society. Frank Sinatra, Marilyn Monroe, and Elvis Presley resided in the small town at the foot of the Santa Rosa Mountains. And in 1966 Ernst and Gladys Krenek bought a small house with a view of the surrounding mountain ranges on the western edge of the town in the Caochella Desert Valley.

The architecture in Palm Springs is informed by the mid-century modern style, which, as the American post-war interpretation of the Bauhaus style, gained currency in the greater Los Angeles area. In the design of buildings and furniture, the combination of simplicity and elegance, always with consideration for functionality, led to forms that are still attractive even today. In the Kreneks’ house, the open architectural design with generous glass surfaces, entirely typical of the style, allows a wide view in three directions of the surrounding desert garden with palm trees, citrus fruits, and cactuses.

Although already on a number of occasions before and after the death of Gladys Krenek extensive material was transferred to the archive of the Ernst Krenek Institute Private Foundation, during a visit in 2019 it was still possible to find abundant traces of the former residents of the house once inhabited by Ernst and Gladys. The propensity, apparently aided by the Kreneks’ mentality, to not throw anything away led to a practice of sustainability that is applaudable from today’s point of view, and to a still authentic ambient of the couple’s living situation. (On the other hand, from an archival viewpoint, also to a hardly manageable amount of material without direct epistemic value.)

Very eloquent impressions are conveyed by the impeccable condition of the stove and other kitchen and household appliances, which could be used without a problem as props in a Hollywood movie of the 1960s. Or knitting utensils with knitting patterns for clothes from a magazine of the same period. The magazine racks accompanying practically every seat offered abundant place for the storage of these and similar periodicals.

In Krenek’s studio, in which his Buchla synthesizer and tape-recording equipment were formerly located, one still finds framed portrait photos of Schoenberg, Webern, Stravinsky, and Kraus, in addition to an ingenious plug-in board to connect the various audio devices. Moreover, a small Austrian flag and – as everywhere in the house – posters and picture postcards with mountain landscapes and biblical motifs.

The extensive recipe collection and a number of English-language books on Austrian cuisine could tell their own story of enjoyment and culinary devotion to the homeland.

The Bösendorfer grand piano, for which Krenek received from the Austrian firm a confirmation that it was indeed the first in Palm Springs, is yet today in excellent condition.

In this mixture of music and cuisine, attachment to Austria combined with American lifestyle, mountain panorama in California desert climate, Krenek is reflected in so many ways that the house really makes possible a kind of encounter with the composer.