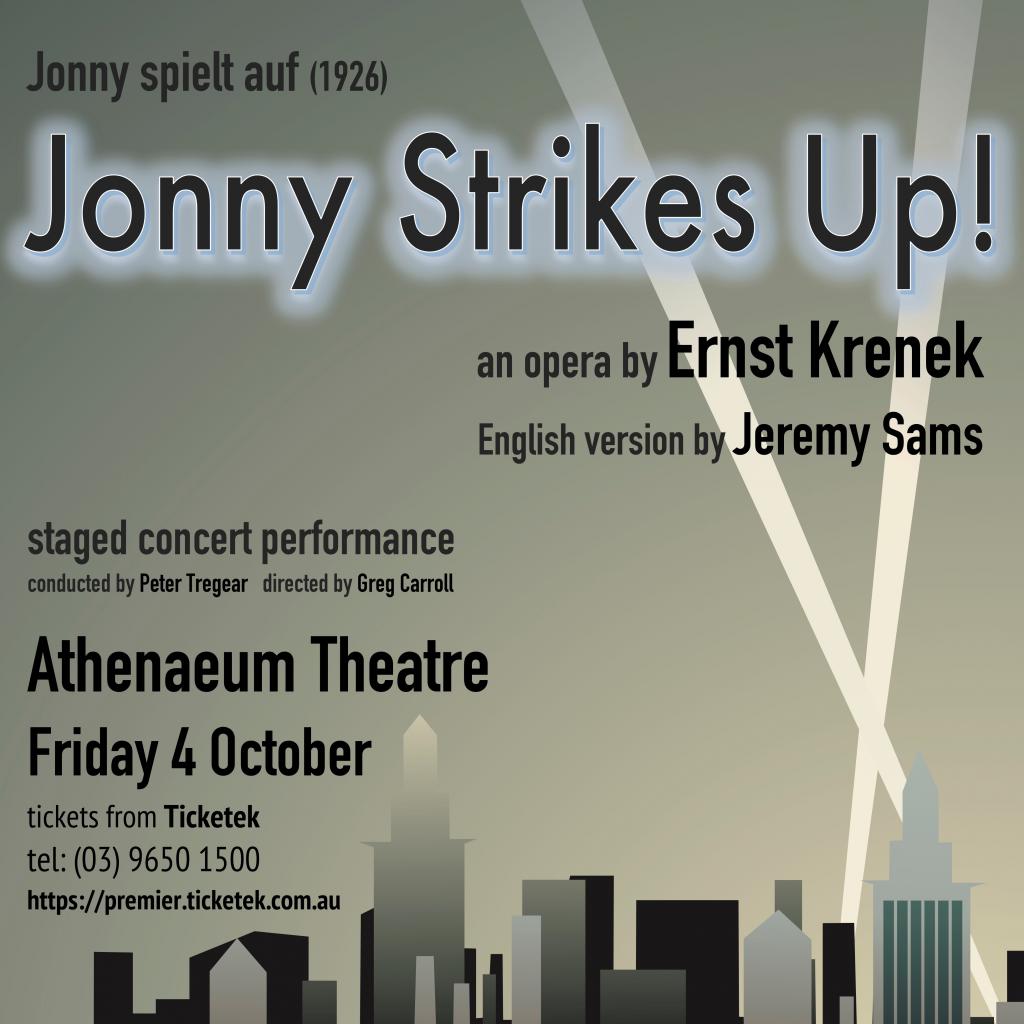 Striking Jonny up, down under…

Despite conquering the stages of Western Europe, as well as Leningrad, Moscow, and New York, in 1920s, and more recently gaining renewed attention from opera houses across the globe, Jonny spielt auf has not yet been performed in Australia. It’s not for the want of trying, or even—initially at least—for want of interest. News of Jonny’s triumphant success certainly reached Australia in 1927 and 1928. In August 1928 the Melbourne Argus ran a report from its own London correspondent who, in reviewing that year’s operatic season at Covent Garden, noted that if Jonny spielt auf been staged there, ‘Covent Garden would have been crowded’. The problem it faced in London, the correspondent noted, ‘is not finance but the necessity for summoning up the courage to produce new works’.

In the late 1970s, through the advocacy of the actor and comedian, Barry Humphries (who even travelled to Palm Springs to discuss the possible production with Krenek himself), the national opera company in Australia provisionally scheduled a season of Jonny for the Sydney Opera House.  The necessary courage was, however, still lacking and the production was cancelled. There have been at least two further attempts I am aware of by Australian opera companies in the years since.

There are broader reasons for this long neglect in Australia. Whereas Weimar-era novels, poetry, cinema, sculpture, art, and craft are routinely revived and celebrated here, a good deal of the music of this time remains neglected. Owning above all to the success of the Third Reich in suppressing the lives and works of a whole generation of composers, very few musicians today in Australia have heard of (let alone heard) the operas of Krenek or Franz Schreker, Viktor Ullmann, Paul Hindemith or Max Brand, or the instrumental music of Erwin Schulhoff, Hans Gal, or Gideon Klein, to name just a few.

This destruction of musical memory is not just Europe’s loss, it is also Australia’s. Among other things, such Weimar musical culture reflected a time in which the realms of so-called ‘popular’ and ‘classical’ music routinely informed and inspired one another. Since then, however, we have all been saddled with a kind of entrenched mutual incomprehension and exclusion across the popular and classical music realms.

Another of under-recognized innovations of Weimar musical culture, and of Jonny in particular, was its transformation of the operatic stage from essentially a non-urban fantasy realm to one focused on the experience of living in a city. The chief catalyst for this transformation in the opera is the relationship that the introspective composer Max develops with a free-spirited opera singer, Anita. It is rather wonderful for us here in Australia to discover that this part of the plot of Jonny was inspired by Krenek’s own relationship with the Australian violinist Alma Moodie (1898-1943).

This is a message, I think, that has relevance to Australians today as it obviously had to Europeans in 1927. So, I am delighted indeed to be helping Jonny at last to strike up Down Under!

On 4 October, the first (concertante) performance of Krenek’s popular opera "Jonny spielt auf" in the English version by Jeremy Sams (Jonny Strikes Up!) will be given at the Athenaeum Theatre in Melbourne.